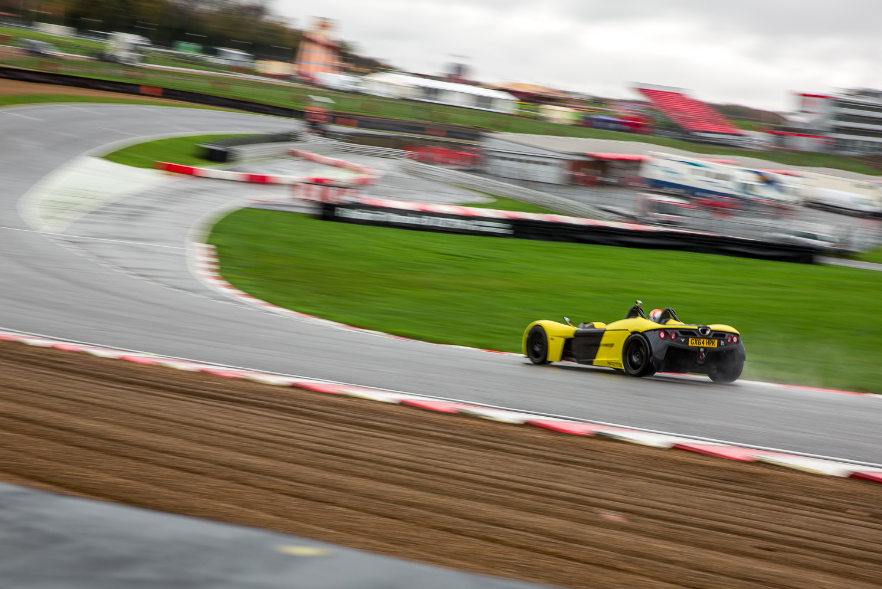 Elemental Cars are an advanced track car manufacturer which started producing the RP1 in June 2016. This stunning new product weighs in at just 580 kilogrammes with 320 bhp and a 0-60 mph time of just 2.8 seconds. More impressively it does this as a road-legal vehicle with room for a passenger and storage space for the shopping. One problem you have with such prodigious power in such a light chassis is matching the cornering performance to the stunning straightline experience by producing enough grip to get around those gorgeous bends and sweeping curves. Elemental, of course, opted for the most elegant light-weight solution for this on the RP1 - aerodynamic downforce.

Aerodynamic downforce is downwards thrust created by the aerodynamics of the car, the purpose of which is to allow a car to corner faster by increasing the vertical force on the tyres, and thereby creating more grip. The vehicle is pressed down towards the ground increasing its stability. In the schematic above, the use of a wing to generate downforce is illustrated. Downforce is created as a consequence of Newton's third law (every action has an equal and opposite reaction). Because air is a gas, the molecules are free to move about so any solid surface can turn the flow. In this case the aerofoil turns the air upwards by slowing the air on top of the wing and by accelerating the air under the wing. By turning the air upwards, by Newton's third law, the wing is pushed downwards.

In the diagram above we show a schematic of a diffuser. The flow is going fast through the throat of the diffuser which gives us low pressure. We know this by applying the Bernoulli equation and in fact just like in the wing case described above the net downward force on the diffuser roof (the red line) is matched by the upward force applied to the air beside it, again applying Newton's third law. You are now ready to understand how the RP1 generates downforce.

The RP1 develops its downforce primarily using its floor geometry which is flat with a pronounced front splitter. Its powerful front diffuser develops suction at the front of the car and also pushes the front wheel wake losses outboard away from the rear of the floor protecting the dramatic rear diffuser, which generates substantial downforce at the rear of the car. And as we showed above low pressure is generated under the floor of the car because the diffusers push the air upwards. A very elegant solution, without a wing in sight to spoil the car's lines, and obtained by some very clever packaging and a unique driving position (for a road legal car).

The image above shows a car cornering with the centrifugal force indicated by the red arrow, illustrating the force experienced by the car when cornering. If the car was driving on pure ice (with no grip) it would not turn the corner - it would just keep going in a straight line. Under normal conditions the car turns the corner by exploiting the friction between the tyre's contact patch and the road, which we know better as grip, to generate a centripetal force to counteract (or match) the centrifugal force. The centrifugal force increases with speed so if we want to corner faster we need to generate more and more grip to increase the centripetal force, to balance the centrifugal force and keep the car cornering as the driver intended. Eventually we will reach the limit of traction at either the front or rear axle, leading to understeer if the front loses grip first and oversteer if it is the rear.

Above we show a schematic of what is happening in a corner. We have the centrifugal force F (the arrow pulling the block to the right) which gets larger with increasing speed. Balancing this we have the centripetal force Ffr which is proportional to N (the normal force pushing down - the best example of this is weight). μ is the coefficient of friction and is a property defined by the stickiness of the tyres and the coarseness of the road surface. We can see that the easiest way to increase Ffr is to increase N. You can try this at your desk. Slide your keyboard on your desk surface. Now push down on the keyboard and try to slide it again, you will find it is harder to slide now. This is why Elemental wanted to increase the downforce on the RP1, with more downforce the car can balance the centrifugal force at higher speeds. You could increase the normal force N by making the car heavier. While this would work it would have the effect of reducing the acceleration of the car (making it slower!). So now you can see why Elemental chose downforce as their means of increasing cornering speeds and why LCS were delighted to help generate more. 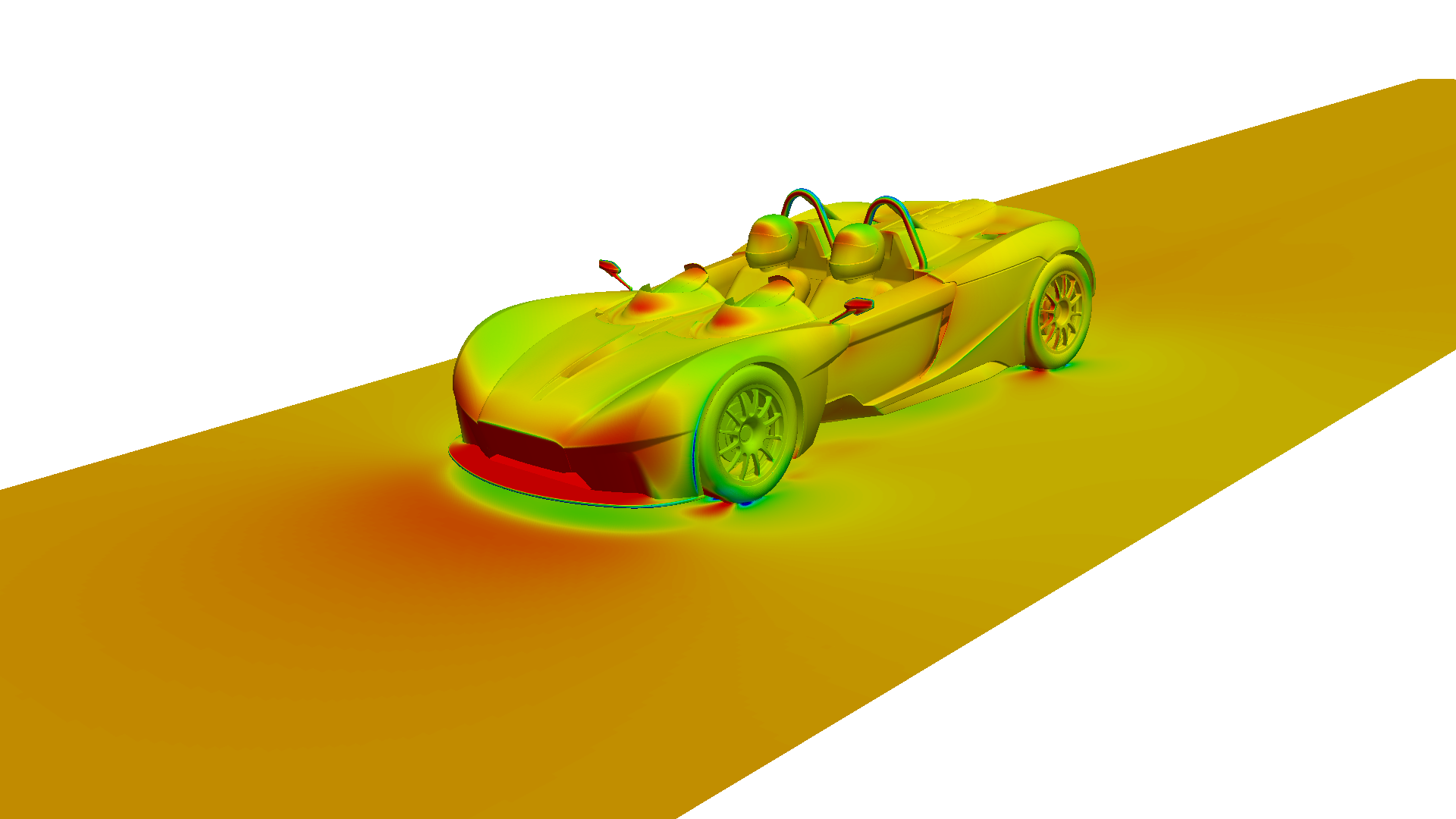 When London Computational Solutions (LCS) first heard from Elemental, they asked for a Computational Fluid Dynamics (CFD) analysis of their current car with a view to understanding its aerodynamics better, so they could refine its aerodynamic balance. Our first milestone was to demonstrate that our CFD modelling matched their wind tunnel data and track results. Once we had satisfied their healthy engineering scepticism of simulation technology, which complies with our philosophy that the first step in exploiting numerical techniques is to prove their engineering accuracy, we moved onto the main topic of the project - more performance.

After a detailed debrief from the vehicle dynamicist and trackside aerodynamics consultant, establishing that the LCS CFD results matched the behaviour of the car on track, Elemental explained they felt they would like to move the aerodynamic balance rearwards by about 5%. I replied that there were two ways of doing this, the first being to back off the front downforce and the second being to increase the rear downforce. The immediate emphatic response from Messieurs Begley, Fowler and Kent (the Elemental engineering directors) was "MORE DOWNFORCE PLEASE!". This invoked a strong burst of nostalgia in my mind, reminding me of the last time I had with worked with John, Mark and Peter - in 2007 at McLaren F1 winning 8 World Championship races in the season. An achievement based on a relentless drive for more downforce. Bear in mind the Elemental RP1 already has more than twice the downforce of any of its' competitors, but this is how you stay ahead - MORE MORE MORE!

The brief was now clear and LCS set off to deliver the customer's requirement. But then came further instructions from Elemental, no appendages were permitted (no wings sticking out!) and their packaging of the 320 bhp 2.0 litre turbo and 6 speed sequential gearbox must be respected. Very much like my F1 days a difficult aerodynamic challenge with tight geometric constraints. Then came the next inevitable F1 analogy - "Mark, could you get this done in a couple of weeks - we need to charge up the Goodwood Hill at the Festival of Speed next month so we need some answers quickly". And this fits perfectly with the LCS-FAST philosophy. Our passion is for doing things FAST, in engineering you build on what you did yesterday so if you get more done today the better tomorrow will be. So we work FAST. 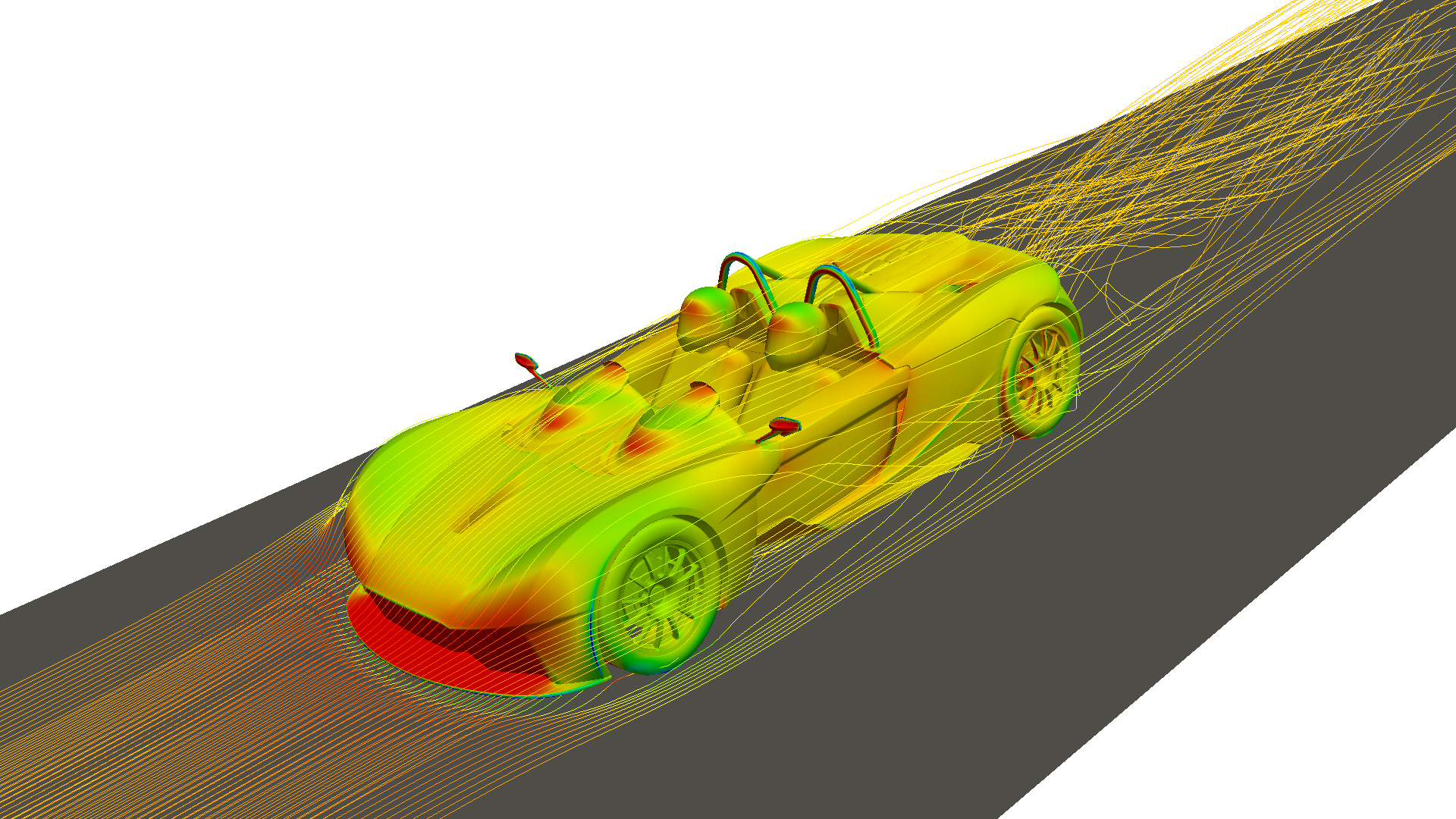 LCS then redesigned the rear half of the floor to surpass Elementals' targets delivering 15% more downforce and a greater than 5% shift in aerodynamic balance rearward and met the Elemental deadline. Thus the RP1 retains its stunning turn-in capabilities but now with better stability on corner entry and even more traction on exit. This will give the RP1 >> 400 kg of downforce at 150 mph! See the Elemental website for more details. And as you might expect Elemental are not resting on their laurels, they are still asking for MORE so watch this space.....